While this is an articulated fly, it's actually pretty straight forward and simple.  For me, I would have to substitute something for the UV resin that wouldn't be too hard.


Fly Fishing the Ozarks YouTube Channel: https://www.youtube.com/channel/UCH9Ra827nueyjCl3h7aLwvA
Posted by Show Me Fly Guy at 6:12 AM No comments:

Gunnar Brammer (YouTube star and incredible fly tyer) has developed a series of videos dedicated to tying flies on jig hooks.  The series is directed toward people using spinning gear, but i think you could throw some on fly rods depending on the amount of the lead and the weight of the rod.  Seeing as how many fly fishermen were spin fishermen first, I thought you boys and girls would dig this.  This would also be a great way to get kids started fly tying.  Everything is bigger and thus easier to see and the materials are pretty easy to work with as well.  The weather stinks (around here at least) so you might as well get in front of the vise and play with some new patterns.

If you need to be reminded that warm weather still exists and prettier days of fly fishing lie ahead, then this video should give you both.  Also, if you are like me and you have a deep appreciation for the beauty of a brook trout, then you'll dig this video as well.  And finally, if you're like me and struggle to find thirty minutes to devote to a video on your phone/computer, then feel free to skip some of the potentially long-winded parts to get to the good stuff.  And by good stuff, I mean catching and releasing fish!


The New Fly Fisher YouTube Channel: https://www.youtube.com/channel/UCk2DJldSE7hhQTU8rjNHeYw
Posted by Show Me Fly Guy at 5:41 AM No comments:

Do you need a fun and challenging fly to tie?  Try this little devil out.  Obviously, it's a saltwater pattern but I bet largemouth, pike, and musky would smash this fella as well.


Link to Flymen Fishing Company YouTube Channel: https://www.youtube.com/channel/UCaIeIyLD1-KP2wBn1EPeGdg
Posted by Show Me Fly Guy at 11:28 AM No comments:

I like flies that are simple and effective but it's sometimes fun to add a challenging little element to keep you on your toes.  This fly incorporates a dubbing loop but instead of putting dubbing in the loop, you use a section of rabbit hair from a zonker strip to create a collar for this fly.  That's a fun twist rather than just using schlappen or webby hackle.  Overall, this looks like a fun and effective fly that you could also tie streamer style instead of on a jig hook!

My Graduate Program Has Started

There is not an easy way to put this guys/gals, so let's get right to it; my graduate class has started and you've probably noticed already.  This class is taking up some of the time that I was able to devote to this blog and I'm probably going to miss a day here an there...like yesterday.  I promise that I will do my best to continue to provide almost daily content, but I'm going to miss a few days here and there, and for that, I'm sorry.

If you have no idea as to what I am talking about, here's an excerpt from a post that I published last November.  Hopefully this irons things out!

As a public school teacher (no, I do not make a fortune being a fly fishing blogger), I receive annual raises for two reasons.  One is for years of service and the other is for furthering my education.  I have two bachelor's degrees and a master's degree but I will no longer receive any raises due to the way our pay scale is structured.  Please don't take that as complaining, it's just the way it is and I have seen this coming for a while now.  This is what prompted me to apply to a graduate school program.  Specifically, I applied to the University of Central Missouri and the Instructional Technology Education Specialist Degree that they offer.  If you didn't know, this is a degree between a master's and doctorate.  It's a goofy thing, I know.

On Wednesday, I received an email informing me that I had been accepted into the program!  Now this is good and bad news.  On one hand, I can start working toward additional raises and have a better income, and this is going to make me a better teacher.  On the flip side, I will be taking college classes for the first time in fifteen years and paying about $15,000 for the opportunity to do so.  This also means that I am going to need to scale back some of me Show Me Fly Guy activities that I have taken on and love with all of my heart.  I am going to do my best to bring you content on a daily basis Monday through Friday on the blog but the YouTube videos will probably become less frequent.  Until my classes start, hopefully you won't notice much of a change, but there will be days that I miss like yesterday as I prep for classes.  I promise I will do my best to update the site and I would greatly appreciate your patience as I try to navigate through everything.  You guys are the best and your views are what keep me posting!  Thank you for your support!

The Fly Fishing Film Tour is headed back to Missouri and many other parts of the country as well!  Here are the dates and locations for Missouri and Kansas but for more specifics, just click on the link below. 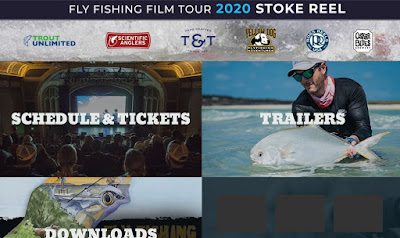 At the risk of sounding hyperbolic, this was the best Kansas City Boat & Sportshow that I have ever attended!  There were new exhibits and exhibitors and the weather didn't seem to scare people away.  Here are some of highlights of the show...at least to me! 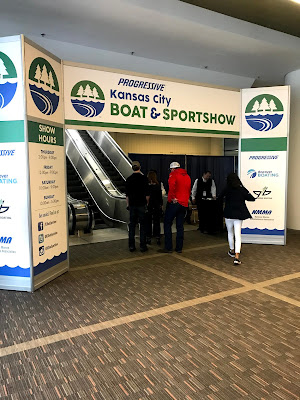 Kayaks!  Kayaks were everywhere it seemed like!  Not only that, but they are becoming more advanced and have more options than ever.  From automated anchors, to LED light bars, and different means of propulsion, if you are a kayak enthusiast, there was plenty to drool over and marvel at! 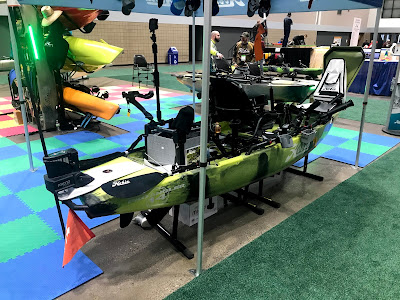 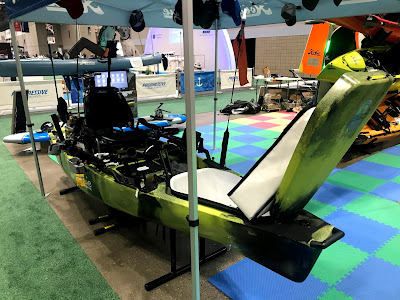 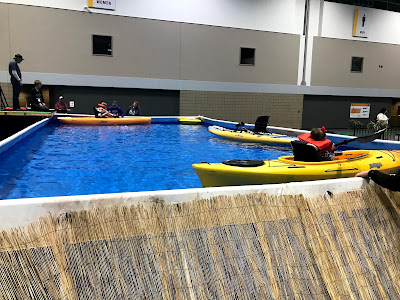 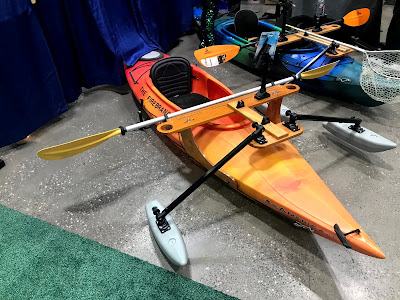 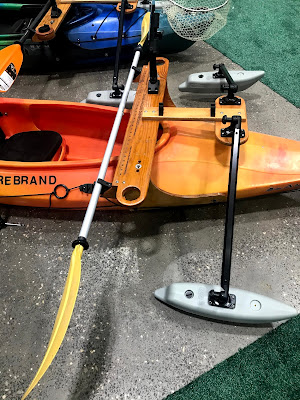 The trout pond was back and was free again!  This is always a good draw and while I didn't see anyone catch anything, it was just nice to be close to some fish for the first time in awhile. 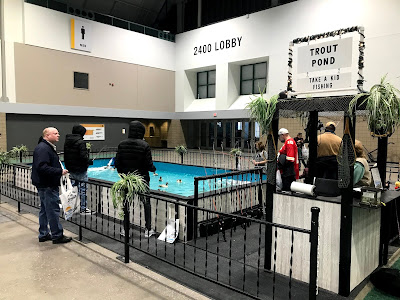 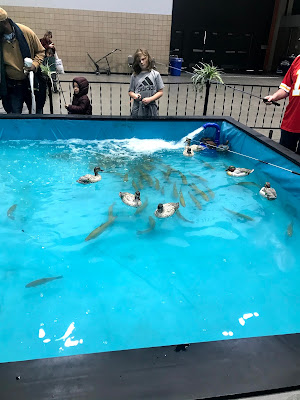 I didn't talk to these folks but this truck was impressive with it's versatility!  It's not hard to imagine camping out in this thing in some Missouri wilderness! 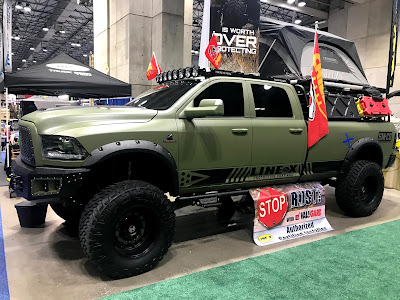 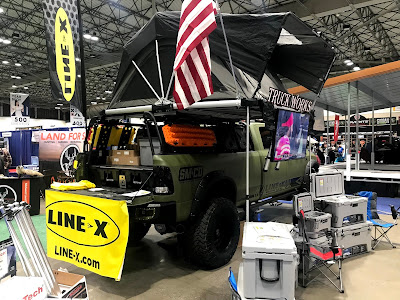 Now these guys were awesome to talk to!  The Pomme de Terre chapter of Muskies Inc., works to promote muskie fishing and conservation in Missouri as well as educate the public on fishing for muskies as well.  You'll be reading more about these guys in an upcoming post!  Here's a link to their site if you can't wait and want to learn more on your own:
http://www.missourimuskies.org/ 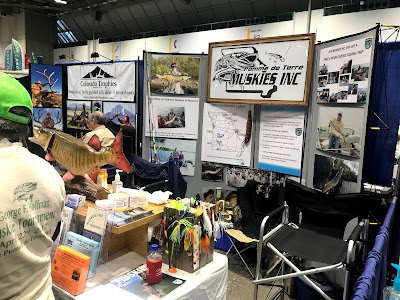 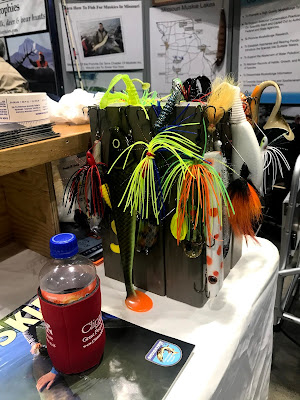 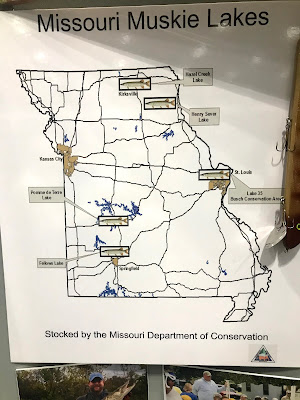 This little boat caught my eye and amazed me with some of its engineering.  I saw it at the Sportsman's Outfitter and Marine exhibit and it is built by Blue Sky Boatworks (a division of Jackson Kayak.  It is called the 360 Angler and has a pedal driven prop system.  The rudder is controlled by handles on the side of the seat, and is stable enough to stand on.  The wheels allow you to drag it up and down a boat ramp and easily lift up to be out of the way while on the water!  Here's a link to Sportsman's Outfitter and Marine as well as Blue Sky Boatworks. 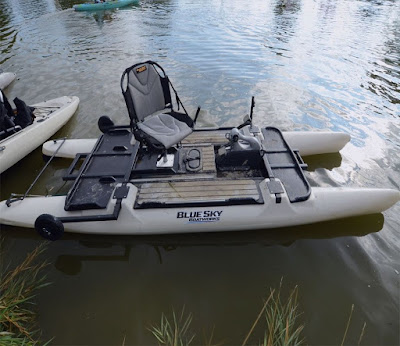 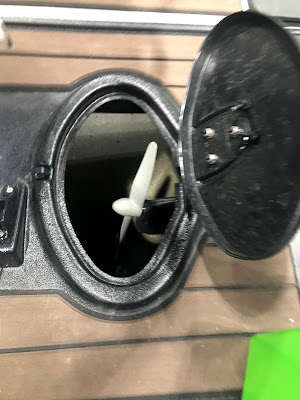 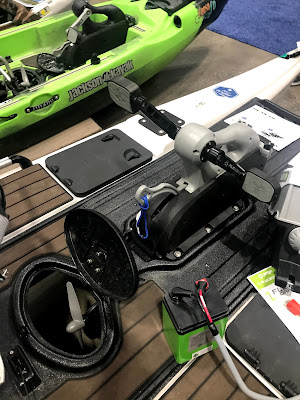 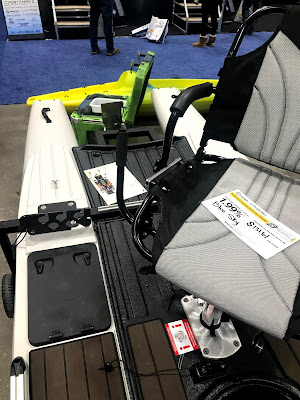 This is another kayak from Sportsman's Outfitter and Marine.  It is designed specifically for fly fishermen.  You can see the padded place for the reel and a slot that the fly rod fits into!  A rod would basically run the full length of the kayak and there is also a strap that secures it to the vessel. 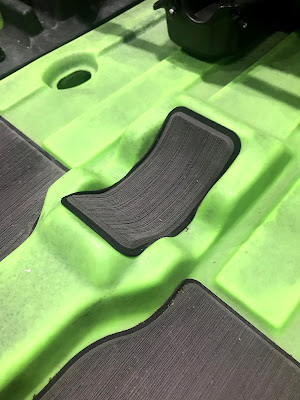 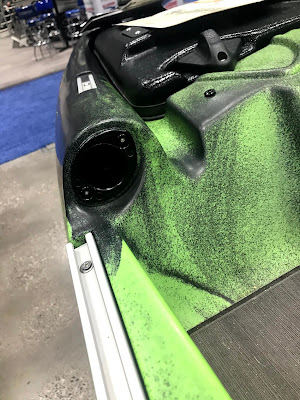 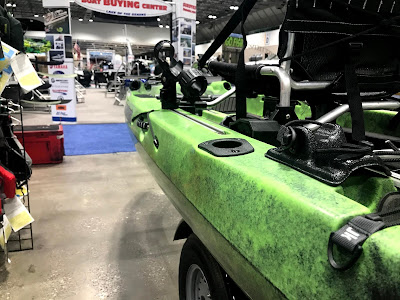 Last, but certainly not least was an amazing presentation by James Dill.  James is a fishing guide on Lake of the Ozarks and owner of Crock-O-Gator Bait Company.  He put on a heck of a presentation about soft plastics and specifically Ned rigs and shakey head worms.  I personally watched him catch 2 bass out of the hog trough and was in awe of his skills.  Again, you will be reading more about him in the future, but feel free to check out his guide service page and the Crock-O-Gator page. 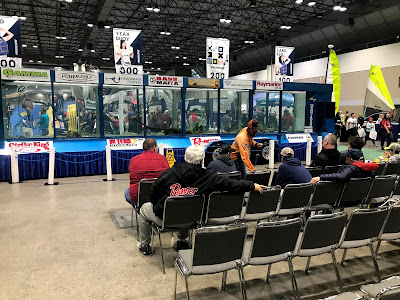 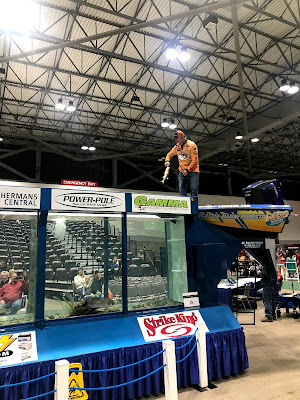 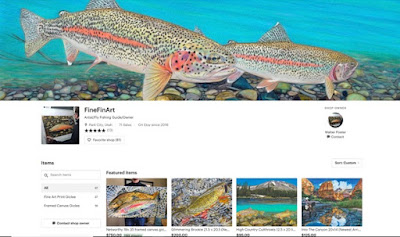 It seems that most fly fishermen appreciate beauty.  We cherish the bright pink stripe of a spawning rainbow trout.  We find the magnificence in a spring fed stream at sunrise.  We treasure the fact that trout are pretty fish that live in pretty places!  Aside from those obvious beauties that we hold dear, most fly fishermen will stop to appreciate a well-taken photo of a fish or stop to gaze at a painting that depicts a location or species.  If all of this seems to hit home for you or you can relate on some level, then you should swing by the Fine Fin Art shop on Etsy.

Walter Foster (owner, operator, artist extraordinaire) does some amazing work that you have to see and will probably admire.  Aside from being a guide and founder of Park City Trout Tales (outfitter), he is also an amazing artist.  I could sit here an type a bunch of words that communicate how pretty his artwork is, but you just need to see it for yourself!

Park City Trout Tales Site: https://www.trouttales.com/
Posted by Show Me Fly Guy at 4:11 AM No comments:

This video first appeared to me on the Frankenfly site, so I wanted to give credit where it is due.  It was also too good to not share!  This is a great fly that is tied by an amazing fisherman who is also the creator of said fly.  Without further adieu, here is tying the Clouser Minnow with Bob Clouser.


Link to Fly Fishing Journeys YouTube Channel: https://www.youtube.com/channel/UCFq9XyZit9BQl0o47AdMFLg
Posted by Show Me Fly Guy at 4:08 AM No comments: 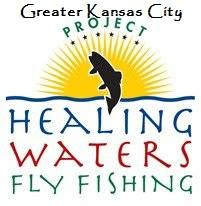 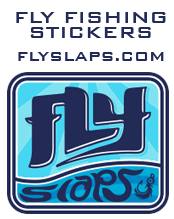 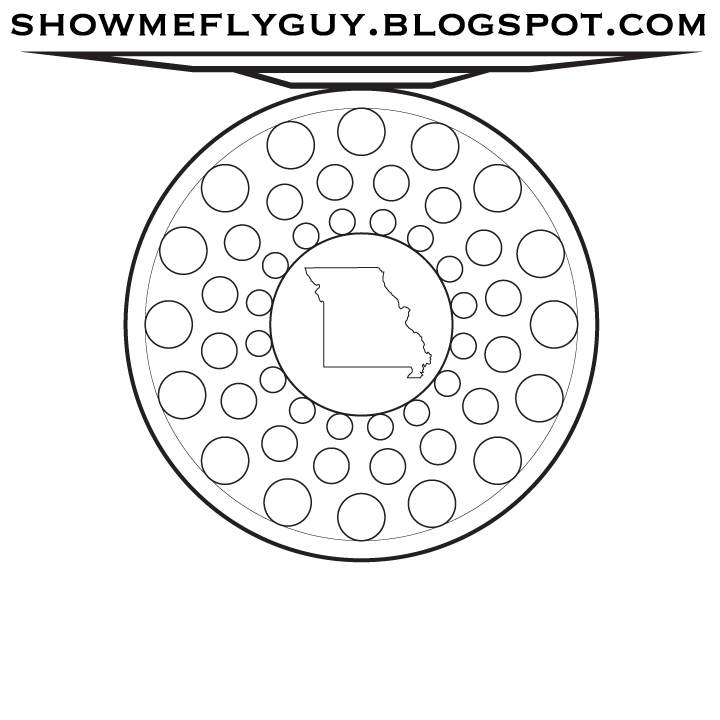